Passive House Plus is the world's first English language magazine focused on building and upgrading to the world's leading low energy standard - passive house. Published in separate UK and Irish editions, the magazine's focus extends beyond energy efficiency to take in indoor air quality, water usage and the environmental impact of materials. The magazine won the Business to Business Magazine of the Year award at the Irish Magazine Awards in December 2012.

The magazine is an evolution of Construct Ireland (for a sustainable future), the award winning Irish sustainable building magazine. First published in January 2003, Construct Ireland played a key role in raising consciousness of the need for low energy, low impact, healthy buildings in Ireland, affecting the design and construction of tens of thousands of new buildings. Construct Ireland has been credited as playing a key role in the introduction of world class low energy building regulations for new homes in Ireland - with mandatory targets including 60% energy and carbon reductions compared to 2005 standards and the installation of renewable energy systems.

The concept of producing a magazine focused exclusively on sustainable building in a relatively small market such as Ireland may have seemed foolhardy in 2003. Fossil energy was cheap, Ireland was in the grip of a record-breaking construction boom characterised by quantity over quality, and addressing climate change was not perceived as anything like a priority for Irish businesses.

In the intervening years, however, everything has changed, and sustainable building has moved from the fringes to become a central concern for all new construction projects. Construct Ireland has been at the front line, driving that change on, whilst simultaneously evolving into the most widely-read, most influential construction magazine in Ireland.

Our impacts are numerous and include everything from helping specifiers to source innovative sustainable materials and technologies, to successfully campaigning for policy change for the built environment.

We drove forward groundbreaking local energy initiatives which ultimately resulted in changes to building regulations for all new homes including 60% energy and carbon dioxide reductions, mandatory use of renewable energy and airtightness testing during construction. We even played a part in accelerating the introduction of energy ratings for new homes by 18 months, as a result of lobbying through the Joint Oireachtas Committee on the Environment in 2005.

The opinions expressed across the Passive House Plus platforms are those of the authors and/or of individuals quoted by the authors and do not necessarily reflect the views of the publishers. 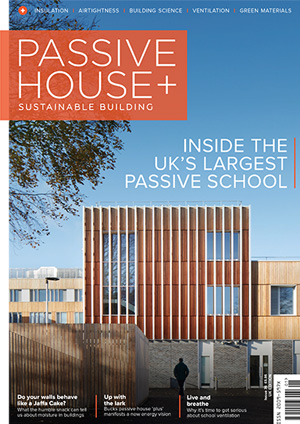